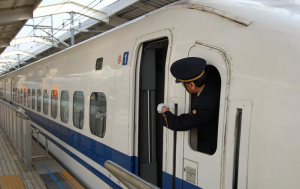 If you’re visiting Tokyo you’ll fly into Tokyo International Airport Haneda or Narita International Airport. At the information desks at both airports you’ll find an English speaking person who can provide essential tourist information and help you reserve seats for public transportation into central Tokyo. Don’t panic if you feel lost or overwhelmed or if you lose your way at the airport after you’ve cleared customs. Most Japanese people learn English in junior high school so don’t be afraid to ask a stranger for help with directions. The locals are happy to speak some English even if their language skills are limited.

If you have a choice, it’s better to fly into Haneda Airport. This airport is much more convenient than Narita Airport and transport costs are a lot cheaper if you want to get into central Tokyo. Although this airport opened in 1931, it was mainly designated to handle domestic traffic but after a renovation project in 2014 a lot more international flights have been landing at Haneda. This is great news for travellers because Haneda Airport is situated only 30 minutes from downtown Tokyo, whereas Narita Airport is at least 60 minutes from Tokyo.

You have several options if you want to get into Tokyo from Haneda Airport. One of the most convenient ways is via the monorail from Haneda Airport to Hamamatsucho Station. It costs ¥500 and it only takes 15 -20 minutes. You can also take the Keikyu Railway Line which travels to most of the main train stations in metropolitan Tokyo. The Keikyu Line takes about 20 minutes to Tokyo Station and costs ¥580. If you would prefer to take a bus from Haneda Airport, the Keikyu Limousine Bus has designated seating and it travels directly to many major hotels. This bus is perfect for travellers with a lot of large luggage. The Keikyu Limousine Bus costs between ¥580 – ¥1,650, depending on your destination.

A taxi from Haneda Airport costs approximately ¥7,000 but it’s a very convenient way to travel straight into Tokyo early in the morning or late at night. Just remember, during peak hours, taxis can get a lot more expensive.

If you arrive at Narita Airport, the most comfortable way to get into Tokyo using the train system is via the Narita Express (NEX). It takes 60 minutes to travel to Tokyo Station and it costs approximately ¥3,000.

The Keisei Skyliner is the quickest way to get into Tokyo from Narita Airport. It only takes about 40 minutes and it costs about ¥2,500, but it arrives at Nippori Station or Keisei Ueno Station and you’ll need to transfer to the JR Yamanote Line to get to Tokyo Station. This takes about 10 minutes and the extra fare costs ¥160. All seats are reserved.

The Keisei Limited Express is the cheapest option to get from Narita Airport to Tokyo. This is a normal commuter train and it gets very crowded but you don’t need a reservation for this train. It costs about ¥1,000 and it takes about 75 minutes to arrive in central Tokyo.

Catching a taxi from Narita Airport to central Tokyo is not recommended as this could easily cost you ¥30,000 (£165/$US250) or more during rush hour.

There are Airport Limousine Buses which travel from Narita Airport directly to the major hotels in central Tokyo. This is a great bus service if you’re staying at one of the main hotels. It takes about seventy-five minutes and it costs about ¥2,500.

If you’re visiting Kyoto, Osaka or Nara from overseas you’ll fly into Kansai International Airport. This airport is a hub for Nippon Airways and Japan Airlines.

A Pasmo or Suica card is an IC card (“Intelligent Card”) or prepaid smart card that you can use all over Japan for travel on buses and trains, including the subways. All you need to do is press it on the readers on buses or place it on the automated gates at train stations for a second or two (don’t insert it in the ticket slot), and the cost of your journey will be automatically deducted. You can also make small purchases with the Pasmo and Suica cards at dedicated locations and shops. If you want to top up your card with more money you can do this at any time so you never have to face the embarrassment of not having the right ticket.

The question people ask the most is which one should I buy — the Pasmo card or the Suica card? Both cards perform the same function but they’re produced by different companies.

The initial deposit for a Pasmo card is ¥500 and you can buy it from vending machines at subway stations in Tokyo. The Suica card also requires a ¥500 deposit but you purchase this from JR train stations in Tokyo or online from GoVoyagin. You can’t use these cards to travel from one side of Japan to the other but you can use it once you get to your destination (for example in Osaka or Kyoto).

You can get back any unused credit and the initial ¥500 deposit on your Pasmo or Suica card at the end of your trip but you’ll incur a ¥220 handling charge on the Suica card. Please not that Suica cards issued by JR East Japan can only be returned at JR East stations in Tokyo.

If you’re arranging travel services for a VIP or if you just like to travel in style and live the high life then you’ll love the services a company called TOKYO LUXE has to offer. Whether you need a private limousine from the airport, a helicopter to your business meeting in Tokyo, backstage access to fashion show tickets, a personal shopper, or an introduction to the finest restaurants in Japan, TOKYO LUXE can customize their services to meet your needs. 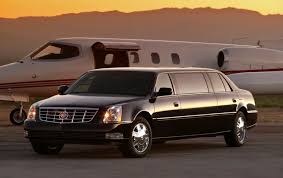 If you’re planning to travel to a lot of destinations in Japan you should purchase a JR Rail Pass before you arrive in Japan as you’ll get unlimited travel on the JR network and free travel on a lot of the Shinkansen Bullet Trains. Prices start at about ¥29,110 for an Ordinary adult seven-day pass and ¥38,880 for an adult seven-day Green Pass (First Class). If you’re planning on visiting other areas of Japan besides Tokyo then the Shinkansen Bullet Train (see picture above right) that travels at 240-320 km/h (150-198 mph) is the fastest and most convenient way to get there. 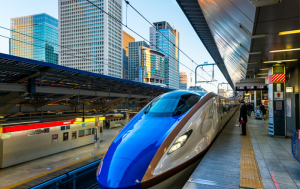 One of the best ways to get around Tokyo is on the JR Yamanote Line that runs in a loop around Tokyo. Shibuya, Ebisu, Harajuku, Shinjuku and Shinagawa as well as many other popular train stations are on the Yamanote Line so it’s not difficult to get to the main areas of interest.

Many hotels, public areas, restaurants and cafés have free Wifi in Japan. However, people often complain about dropped signals and poor connections in these places. Tourists may also face the inconvenience of only being able to use Wifi in designated areas so the best way to get around this is to buy a SIM card or rent a mobile phone or pocket Wifi unit when you get to Haneda or Narita Airport.

You can order a prepaid data SIM card with unlimited data and no overcharges or rent a pocket Wifi through Japan Experience at japanrailpass.com. They’ll deliver the pocket Wifi to your hotel in Japan or you can pick it up when you arrive at the airport. It supports most devices, including iPhone, iPad, Android smartphones, PC and Mac laptops, cameras, and other portable consoles and you can connect to up to 10 devices at one time. At the end of your trip, you can use the prepaid envelope included with your order to return your Pocket Wifi. This envelope can be mailed from any Japanese postal box.

You can also rent a pocket Wifi router from JALABC at their Global Wi-Fi counter at Haneda Airport (International Terminal 2nd Floor) between the hours of 6:30am and 11:45pm. The cost of their pocket Wifi units start at ¥1,500 for two days and go up to about ¥7,000 for 30 days. Alternatively, if you’re arriving at Narita Airport visit one of the QL Liner counters in the arrival lobby, or the North Wing arrival counter of Terminal 1, or the arrival lobby of Terminal 2 for pick-up.

Many people head to Starbucks for free Wifi when they travel but just remember you need to register with Starbucks if you want to use their free Wifi in Japan, but once you’ve done that you’re good to go!

If you’re as tall as me (I’m about 5ft 8″), the leg length on trousers and the arm length on tops, when you try on Japanese clothing, will often be too short so it can be a real challenge buying clothes that fit properly from many shops and department stores in Japan, even from boutiques selling famous brands. It’s also very difficult to find shoes that fit because Japanese women and men are, on the most part, more petite than Westerners. Even if you’re super skinny, your legs and arms could be too long for a lot of the clothing sold in Japan so bring plenty of clothes from your home country. This tip obviously applies to Western men as well.

Most Japanese people claim they don’t perspire or glisten like Westerners do and if Japanese men think they’re going to sweat they’ll wear a thin vest underneath their shirt so if you’ve heard the rumours, yes it’s true, it’s very difficult to find an effective deodorant in Japan. Therefore, you should definitely BYO (bring your own) deodorant from your home country and plenty of it if you’re planning on living in Japan. The weather during the rainy season in Tokyo in June/July can be incredibly humid so you’ll definitely need something to make you feel cleaner and more comfortable.

Tokyo is an extremely crowded city and people are often packed like sushi in a bentō box on train carriages so why do Japanese women always look so fresh, especially during the humid rainy season? If you’re on the train in Japan, you’ll sometimes see Japanese women blotting the T-zone on their faces with a small square piece of paper. These are sweat and oil blotting papers you can buy from a lot of the beauty brands in Japan. They are called aburatori-kami (あぶらとり紙) in Japanese. The literal meaning is paper that takes away oil. I like using them because you can reduce the shine on your face without ruining your makeup. (It’s important to dab. Don’t wipe your face). I like to buy mine from Etude House in Harajuku. Shiseido blotting papers are also available from the Bic Camera stores. If you’re in Kyoto (or at Haneda Airport) look out for a shop called Yojiya. Their blotting paper has been used by geisha and maiko (apprentice geisha) for over a century. You can easily fit a packet of blotting papers in your handbag and they don’t cost a lot to buy. They’re also great souvenirs to give to your friends when you return to your home country. 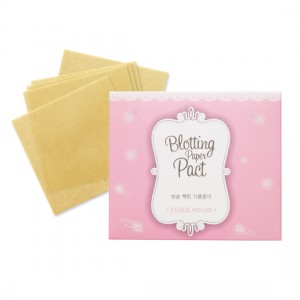 You can save a lot of money on tours and tickets if you visit your local Japan Travel Bureau (JTB) in your home country when you’re planning your trip. JTB offer special rates on hotels, they can organise a variety of tours for you, and you can get great deals on their Shinkansen Tour Packages. You can also buy your Japan Rail Pass from JTB before you fly to Japan.