Prior to 1868, Tokyo was known as Edo. During the Meiji restoration, the emperor and the capital moved from Kyoto to Edo which was renamed Tokyo (Eastern Capital). Tokyo is now one of the most vibrant capital cities in the world, just bursting at the seams with things to see and do. Below are a few of my favourite attractions.

The Imperial Palace is home to one of the most discreet royal families in the world. Visit the surrounding Japanese-style gardens (Kōkyo Higashi Gyoen) with its massive stone walls and marvel at the moats, several guardhouses and strolling gardens that are reminiscent of the Edo period. From the large plaza in front of the Imperial Palace you can see Nijubashi, two bridges that lead into the inner grounds of the palace. This attraction is open every day except Monday, Friday and special occasions. It’s a 10 minute walk from Tokyo Station.

If you appreciate gardens and stunning landscape then I suggest you also visit Koishikawa Kōrakuen which is a 5 minute walk from Iidabashi Station (JR and subway lines). This is considered to be one of the oldest and most beautiful gardens in Tokyo. For your chance to see cherry blossoms, Japan’s unofficial national flower, you can’t miss the weeping cherry tree at the entrance to these gardens. Just remember they’re only in bloom for a short time, usually in early April in Tokyo and Kyoto.

The Edo-Tokyo Museum is, hands down, the best place to discover everything you need to know about the history and culture of Tokyo for just a few hundred yen. “The permanent exhibition, showcasing original objects and replicas, offers visitors a journey through the 400-year history of Edo-Tokyo since Tokugawa Ieyasu entered Edo.” Exhibitions are divided into different time periods and feature life during the Edo period, Tokyo in the age of “civilization and enlightenment”, Tokyo during the industrial revolution, the effects of The Great Kantō earthquake in 1923, Tokyo during a period of rapid economic development and the capital as it is today and how it will develop in the future. Your whole family will love spending a few hours here. It really is a fascinating experience and a must-see museum.

If you love art museums and in particular ukiyo-e (traditional Japanese woodblock prints) you just have to visit the Sumida Hokusai Museum, dedicated to the works of the famous woodblock artist Katsushika Hokusai. The design of this very modern building in itself is a sight to behold. Make sure you pose outside for a memorable Instagram photo opportunity. Inside, you can admire the prints to your heart’s content and don’t miss a visit to the gift shop — here you’ll find some of the best souvenirs in Tokyo.

The Ryogoku area is also famous for being sumo central and Ryōgoku Kokugikan, also known as Ryōgoku Sumo Hall, is where you’ll come across all the action. If you’re interested in getting up close to the wrestlers and seeing Japan’s most famous sport you can get tickets at BuySumoTickets.com. Every bout generally lasts less than 10 minutes so the atmosphere is always electric.

One of the most exciting attractions in Tokyo is the Tokyo Skytree. It opened on 22 May 2012 and it’s the tallest free-standing broadcasting tower in the world. At 634 metres high, it has amazing views of Tokyo with two observation points – the Tembo deck at 350 metres with restaurants, an observatory and shops, and the Tembo Galleria at 450 metres, completely wrapped in glass. You can rest assured knowing that it’s completely earthquake resistant with reinforced concrete and seismic proofing. I highly recommend purchasing tickets in advance online. A Fast Skytree Ticket to avoid the queues can be purchased by international visitors and their Japanese friends at an exclusive ticket counter on the fourth floor at the West Entrance. You will, however, need to show your passport or another form of ID.

If you’re looking for a free alternative, the views from the top of the Tokyo Metropolitan Government Building in Shinjuku are also breathtaking and you’ll save yourself a lot of money. 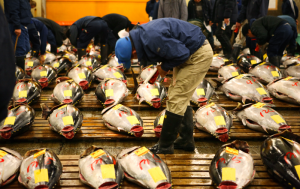 A visit to the Toyosu Fish Market is also a must-see destination when you’re in Tokyo if only because it has been the subject of so much controversy. This market took over from the famous Tsukiji Market in October, 2018.

You may have seen news channels or someone on social media featuring a tuna auction in Tokyo and been blown away by the price and size of the tuna fish (on 05 January 2019 a 278-kilogram blue fin tuna sold for 333.6 million yen or $3.1 million!). If you want to see an auction like this take place with your very own eyes the only way to see this is from the Tuna Auction Observation Deck at Toyosu Fish Market. Keep in mind you can no longer get anywhere near the fish being auctioned like you used to be able to do years ago at Tsukiji and you can only see the auctions that take place between 5:45 and 6:15 in the morning behind glass windows, but there’s still plenty to see later at the general markets at Toyosu. There are three interconnected main buildings, two for fish and one for fruit and vegetables. If you’re hungry and you don’t mind sushi for breakfast you can try some of the freshest sushi in Tokyo at one of the restaurants. The prices here are reasonable and you’ll be pleased to know a lot of the popular sushi restaurants from the old Tsukiji Market have reopened at the Toyosu Market. To get there take the JR Yamanote Line one station from Tokyo Station to Yurakucho and from there take the Yurakucho Subway Line to Toyosu.

If you’ve been to Japan before or if you live in Japan you may have visited the old Tsukiji Market during its heyday and like me you’re probably wishing the market had never been moved but you can still return to the area and go for a wander. The little streets in Tsukiji are full of charm.

If you’d like to feel as if you’re in historical Japan and you’re looking to buy traditional Japanese souvenirs such as a summer yukata or a folding fan, then you should definitely visit Kaminarimon Gate leading to the front of the Buddhist Senso-ji Temple in Asakusa. Built by Taira-no-Kinmasa in 942, it houses the god of wind and the god of thunder and was relocated to this area during the Kamakura period between 1192-1333. Its official name is Furaijinmon. The adjacent shopping street known as Nakamise covers 200 metres and sells an unusual array of souvenirs and Japanese snacks. Located in front of the Kaminarimon Gate is the Asakusa Culture Tourist information Center. It opened in May 2012 and the building was designed by Kengo Kuma & Associates. It is already being recognised as an architectural inspiration.

Another major tourist attraction is Meiji Jingū shrine in Harajuku which was built in honour of Emperor Meiji in 1920. It is simple in its design but considered to be Tokyo’s grandest shrine. It is easily located next to JR Harajuku Station on the JR Yamanote Line.

This is a must-see tourist destination that is extremely popular with foreigners. Don’t miss the National Museum of Emerging Science and Innovation if you want to see Honda’s humanoid robot Asimo and a range of mesmerizing exhibitions. Check out the giant full-size Gundam statue before a spot of shopping at DiverCity Tokyo Plaza. Take a selfie with Angelina Jolie or Brad Pitt at Madam Tussauds Tokyo, soak in the hot springs at Ooedo-Onsen-Monogatari, enjoy exceptional arcade games at Tokyo Leisure Land, and take in the view from the top of one of the world’s biggest Ferris wheels at 115-metres in Palette Town.

BUDDHIST TEMPLES, SHINTO SHRINES AND
THE GREAT BUDDHA IN KAMAKURA

As Tokyo is so busy and overcrowded, it’s always nice to head out to the serenity of Kamakura; especially if you’re visiting when the humidity is high as the area is very cooling. You wouldn’t believe that this quiet town was the political hub of Japan from 1185 to 1333. Kamakura is located in the Kanagawa Prefecture and it takes about an hour to reach from central Tokyo on the JR Yokosuka Line. The area is home to many shrines and temples, the majority are Buddhist and many people make the trip just to see the famous Great Buddha which is the second largest Buddha in Japan. You can also enjoy a delicious Japanese set lunch at one of the many traditional restaurants in Kamakura.

Cherry blossom viewing or hanami as it’s known in Japan is a national celebration which has been appreciated for over 1,000 years in the Land of the Rising Sun. There is evidence of this in famous books like The Tale of Genji and there are lots of descriptions and depictions of cherry blossoms and plum blossoms (which bloom a little earlier) in Japanese haiku poetry and art. The cherry blossoms represent the impermanence and fragility of life because they bloom for a very brief period, usually for just one week after they’ve reached full bloom (mankai). You can see the cherry blossoms (sakura) in late March/early April in Tokyo but they sometimes arrive earlier or later than expected so it can sometimes be difficult to plan your trip around them. If you’re travelling the length and breadth of Japan you have a better chance of seeing them. The cherry blossoms flower as early as January in Okinawa and as late as May in Hokkaido.

You’re going to need to pack a light coat and a sweater if you’re travelling to Tokyo or further north at this time of the year because the weather can be unpredictable and it may even snow! However, if you do have the opportunity to see the cherry blossoms in all their glory you’ll be blown away by their beauty. Give yourselves a few days to see them and try to plan a picnic so you can sit under the trees for a few hours and appreciate them as much as the Japanese people do. There are stalls selling food and drink in the most popular areas for viewing the cherry blossoms and the local department stores sell delicious bento lunch boxes in their food halls which you can enjoy to your heart’s content while you sip from a cup of sake (Japanese rice wine) or umeshu (sweet plum wine) as you admire this charming spectacle.

Below is a list of places where you can see cherry blossoms in Tokyo and the Greater Tokyo Area. Image courtesy of CFAY in Yokosuka Another must see is the rock garden at the Ryōan-ji Temple which was originally an aristocrat’s villa during the Heian period. Also, don’t leave Kyoto without visiting the Gion District at about 6:00 p.m. At this time of the day, you’ll have the opportunity to see many Maiko apprentice Geisha and if you’re lucky even a fully-fledged Geisha walking through the area on their way to entertain and attend to guests at banquets and other occasions. The Maiko won’t talk to you but it’s perfectly fine to photograph them.